Related to discussions or actions on lake level

We would like to thank the DLWID Board for their attempts to preserve our water right by raising the lake to the full impoundment level of 9.53’ during the month of July.  Mother Nature did not however cooperate and the lake never exceeded 9.4’ during the month. Now that we have reached August the lake has been lowered to 9.0’ as per the most recent DLWID resolution on the matter.  Discussion by the Board in the July meeting indicated that the drop to 9.0’ satisfies the draw down requirement for August and therefore can remain until September 1st when we will need to drop another 2 inches.

The current policy has been a great success as it has virtually eliminated the access problems that existed in the previous two seasons.  Residents report unfettered access to their docks and visitors have had no difficulty at area boat launches.  Water quality is greatly improved over the past two seasons as in 2013 we had large patches of algal scum covering the lake as early as Fathers Day; this year scum has yet to surface.  Interestingly water contact advisories were posted in the same week each year based on Microcystin levels.  With the drop in level the algae has concentrated in number as the same number of cells now is suspended in a smaller volume of water.

So today the lake is far from pristine; we have a great deal of algae in the water column but we are light years ahead of the past two seasons.  Unfortunately the algae has begun to surface; but we all have enjoyed July and hope for an August primarily free of scum. We have reasonable access to shallower areas and the canals still are covering the lake bottom. These conditions are greatly appreciated so thanks again DLWID Board.

Around 140 interested parties attended the Devils Lake Water Improvement Association Board meeting in April.  Included in the mix was Mayor Dick Anderson and most of the Lincoln City Council members.  Lake condition and lake level dominated the discussion with nearly 40 testifying during the night.  In the end there were no decisions made by the DLWID board other than to begin the water quality testing for the year as requested by the Devils Lake Neighborhood Association in the March meeting.

END_OF_DOCUMENT_TOKEN_TO_BE_REPLACED

As a community we are very much aware that the public’s interest in the lake and the activities of DLWID are at an all time high.  The District received 1.5 hours of testimony in its last board meeting attended by approximately 140 citizens and participated in a 5 hour workshop with nearly 60 present.

Following these public meetings DLWID board members and members of the DLNA board mutually reached out to each other and participated in series of meetings with the intent to find a path forward.  In those discussions we discovered that the District and the public agree on much more than they disagree.  Generally all parties expressed a common sentiment that the best outcome from recent events would be to harness the enhanced public awareness into a positive outcome that would benefit the lake and the community.

To that end, the Devils Lake Neighborhood Association has outlined a path forward that we feel can accomplish these simple goals.  Our ask is simple; convert six inches of water into the catalyst that builds an engaged community that is supportive of the Districts efforts as described below.  At the conclusion of our discussions last week we felt hopeful that the District would view this as an option that deserved a chance.

END_OF_DOCUMENT_TOKEN_TO_BE_REPLACED

During the upcoming December board meeting the DLWID staff will present the Lake Level Report they have been working on the past few month. According to the report “the impoundment regime change for 2012 is being reviewed. Previously the lake was impounded to a height of 9.53’ beginning as earlier as April 15 through October 15th. In 2012 this was modified in an attempt to mitigate impacts that impoundment has on the erosion, the shoreline vegetation, and fish and wildlife. Following two public hearings on this matter, the Devils Lake Water Improvement District Board of Directors opted to begin impoundment no earlier than June 1st, with a target date of June 15th, and then only to 9.0’. This impoundment regime was conducted during the summer of 2012, and this review is meant to provide insight to the District as to the impacts pro or con that may have had. Considerations will include recreational access, fish passage, septic systems, and water quality, shoreline vegetation.”

We have taken the report and posted each section on this website.  Each section has the heading Lake Level Report.  There are five section in all

We have presented this material without commentary.  We will submit a request to the DLWID board to have this material presented an more than one meeting as December 13 is in the midst of the holiday season and it is unlikely anyone will be in attendance at the meeting.  In the meantime we suggest you review all five sections and draw your own conclusions.

The Devils Lake Water Improvement District conducted a boat dock survey this fall. Water depths were taken at each of the 393 structures on Oregon Department of State Lands list of registered and unregistered docks for Devils Lake. These predominately were located in the jurisdictional waters of the state, although some docks which were measured were outside this boundary in dredged out areas or canals. Depths were recorded at 1 to 2 spots on the dock. The primary depth was taken at the point where the motor of a boat would typically be located if moored at the apparent preferred docking locale. For some docks an optional mooring site was recorded which may provide the upland land owner another position within the existing configuration of the dock to moor their boat. The Crystal Lagoon area was not surveyed, but previous outings confirm this area is utilized and anecdotally favored by non-motorized crafts such as kayaks and canoes. Non jurisdictional docks exist in the back canal system, nor for the most part exist as the width of the canal system largely precludes such structures.

Depth soundings were taken using a fixed device with a 6” square base to standardize the measurements in the variable substrates (muck, sand, bedrock). Depth measurements were recorded in 3” increments which were later converted to decimal feet. Given the nature of taking depths from a boat in real world conditions, the surveyors were conservative in their recording, erring on the low side of a measurement. In other words, the measurements were made in a way that may have slightly underestimated the actual depth of water available by up to 3”. The current lake stage was recorded for each day of sampling, and the depths normalize to water depths of 9.53’ (maximum impoundment), 9.0’ (2012 impoundment), and 8.6’ (anticipated water height after evaporation period for 2012 – this is also near the typical water height seen in the late summer predam modification in 2006). END_OF_DOCUMENT_TOKEN_TO_BE_REPLACED

Devils Lake is home to a genetically distinct line of federally listed Coho Salmon. These fish make their upward migration in the winter period, when the lake is not impounded, but their outward migration occurs from May to Mid July which is typically a period of impoundment. In 2012 the impoundment period was reduced to beginning no earlier than June 1st, with an anticipated impoundment starting date of June 15th, based on lake level at the time. Historically the lake was impounded from April 15th. The District had a practice of pulsing the dam every other night from May 15 to May 31 in an attempt to mitigate some of impacts to juvenile fish trying to make their way to sea. Non-native ambush predators such as large mouth bass and other piscivorous fish may take advantage of the shadowy, narrow outlet the juvenile Coho would necessarily have to traverse in their escapement. END_OF_DOCUMENT_TOKEN_TO_BE_REPLACED 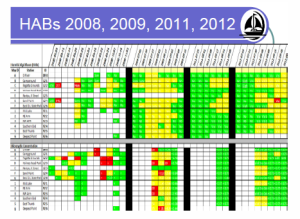 A full water quality report was given in September 2012, so only a summary of that data are provided here. The key aspect of consideration was could the lake level be shown to have negatively or positively impacted the water quality. It had been said at the outset that the water quality question would be the most difficult to answer as it is much more variable and unpredictable especially when dealing with living organism, blue-green algae.

What was apparent from the data set was that while 2012 was a worse year bloom wise from the two previous it was better the 2008 and 2009 when the lake was higher and warmer.

A cursory review of past blooms indicate that 2012 was not the first year we have seen a lake wide bloom. These occurred in 2008 and 2009 certainly, but aerial photographs from the 1990’s show similar events occurring. Bloom constituency was different then, as the more toxic Anabaena and Microcystis dominated the lake compared to the significantly less toxic Gloeotrichia that was the major continuant of the recent bloom. END_OF_DOCUMENT_TOKEN_TO_BE_REPLACED

One aspect of the decision to not impound as much water as had been done in previous years was the potential impact to the shoreline plant community. In fact it was the concern for the viability of the District’s SOS (Save our Shorelines) program that initiated the Erosion Study (Link) that contributed in many ways to the findings for the recent lake level decision. As a healthy shoreline is integral to the health of the lake it is worth nothing that the District continues to sustain its investment in the SOS program with staff, training programs, a native plant nursery, demonstration sites, and a 75% cash match for shoreline property owners. Additionally, the District paid for the development of the Shoreline Planting Guide (Link), and has since then reinvested in multiple printings of this document, sharing it with property owners, landscapers and the like.

Further the District recognizes with the limits of private property owner participation in the SOS program — to date only six have participated and only two property owners have come forward leading to one site evaluation since the June decision — the best opportunity for restoration currently lies on public property. Not only is this on upland publicly owned parcels such as East Devils Lake State Recreation area where the District has its second demonstration site, but more importantly at all areas around the lake up to the 10.4’ meandered legal boundary of the lake. This areas then includes the ring of the lake from Ordinary High Water which is the 10.4’ to some level near 8.3 which may be consider more or less the Ordinary Low Water. This OLW water is ill defined for Devils Lake, but a 2’ fluctuation in lake stage is often seen through the year. END_OF_DOCUMENT_TOKEN_TO_BE_REPLACED