Related to discussions or actions on lake level

If you have been watching the lake level over the past month or more you would have observed it to be very consistently the same height.  If you have been wondering what height, well according to Paul Robertson our Lake Manager the level has been holding right at 9.53’ above Mean Sea Level.  To ensure accuracy the District has measured each section of the dam to 18” above the concrete base.

In his letter dated March 5, 2009 OWRD Watermaster, Greg Beaman established this 18” maximum after having the concrete base surveyed at 8.03’ above MSL.  Therefore, the most accurate measurement of the lake level is at the dam structure, 8.03’ + 18” or 1.5’ equals 9.53’ above MSL.  Observations made this week show water barely flowing over the dam.

If you were a close observer of lake level, you would notice that the staff gauges currently read 9’ 3” or about 3” lower than the reality just described.  Indeed this discrepancy was only recently discovered; it appears that when the Oregon Water Resources Department re-established the height of the concrete base of the dam in 2009 they did not re-establish the accuracy of the staff gauges.  The OWRD has committed to perform a survey of the gauges sometime in the future.  It will take a bit of detective work to determine how many years of historical data were affected by this 3” discrepancy.  It is clear that all recent discussions about lake level have been influenced this variance.  Decisions have been made using a mixture of field observations and references of lake levels as observed at the dam and measured at the staff gauges.

The good news is that no matter what the recorded level has been the actual level as observed where the water meets land has been correct; and by all reports lake stakeholders seem to be satisfied with the result.  Watch for information on updated staff gauges at the DLWID Lake Level Report.

A proposal to use water from Devils Lake for irrigation at Chinook Winds Golf Resort has won the backing of lake planners, who say the deal will reduce the amount of synthetic fertilizer running into the lake.

At its July 2 meeting, The Devils Lake Water Improvement District (DLWID) Board of Directors voted by 4-1 to support the proposal after hearing Chinook Winds General Manager Sar Richards and City Manager David Hawker make the case for the deal.

The plan would see Lincoln City allow the Confederated Tribes of Siletz Indians to make partial use of a City-owned water right on Rock Creek – which flows into the south end of the lake – to withdraw nutrient-rich water from the north end. END_OF_DOCUMENT_TOKEN_TO_BE_REPLACED

Property owners from around Devils Lake have again turned out in force to express concerns about the idea of lowering the lake level during the summer as an erosion prevention measure.

Lakefront property owners packed into the offices of the Devils Lake Water Improvement District on Thursday, June 3, to oppose any alteration to the D River dam, which the district puts in place every year from April to October in an attempt to keep the lake level constant through the dryer summer months.

Current district policy is to set the dam at 9.53 feet, the maximum level permitted since a 2009 review by the Oregon Water Resources Department.

The district’s board of directors put the lake level issue back on the agenda for its June 3 meeting to discuss the findings of a depth study carried out by directors David Skirvin and Randy Weldon. END_OF_DOCUMENT_TOKEN_TO_BE_REPLACED

Some ask: ‘What’s in it for us?’
PATRICK ALEXANDER

Two meetings on either side of the weekend were host to very different reactions to a proposed deal between Lincoln City and the Confederated Tribes of Siletz Indians that would allow the Tribe to use water from Devils Lake to irrigate Chinook Winds Golf Resort.

During a Monday, June 7, joint meeting, members of City Council and Tribal Council agreed the deal is a “win-win” – in sharp contrast to the concerns expressed at the Thursday, June 3, meeting of the Devils Lake Water Improvement District (DLWID), where one audience member asked: “What’s in it for us?”
END_OF_DOCUMENT_TOKEN_TO_BE_REPLACED

Lincoln City Council members unanimously agreed to a change of water source for the Chinook Winds Casino Resort Golf Course during Monday night’s council session that would provide water more conducive to growing grass on the greens, while reducing demand on the city’s water system during a peak time.

City Manager David Hawker recommended signing an agreement with the Siletz Tribe that would exchange treated water currently piped to the golf course from the city’s treatment facility for untreated water drawn from Devils Lake near the course, using the city’s Rock Creek water right. Hawker said the current arrangement – carried out under a 1991 agreement with the owners of what was then known as Lakeside Golf Course – “is not an ideal situation for either the golf course or the city.”

END_OF_DOCUMENT_TOKEN_TO_BE_REPLACED

By now you should be aware that changes to the summer time lake level are once again on the DLWID Board agenda.  We feel it is important to understand the Districts perspective on this matter and we are fortunate that our Lake Manager wrote extensively on the subject in the Managers Report.  It is unusual for us to post such a large excerpt; normally we would simply provide a link.  In order for there to be no misunderstanding or re-interpretation we included the text from the report pertaining to lake level in its entirety. We do feel compelled to note that in the fact checks and clarification section the report mentions some inaccurate statements made by a blog.  This was not nosolarbees.com as we have not yet reported on the water rights issue.  We’re still checking our facts; we do make mistakes but not this time.

Lake Level: Potential operational changes to the dam are being discussed at this meeting as additional information about lake level has been presented that represent that much less recreational water use benefit (e.g. deeper water at docks and shorelines) may be apparent at 9.53’ than assumed. Meanwhile many of the 22 property owners, that petitioned the District in 2009 for a lake level of 9.0 feet may be being impacted without substantial benefit to other lake users as previously assumed. Copies of that petition and subsequent flier distributed by an equally concerned homeowner opposing any change in the water level are available as reference items on our website. Working through these seemingly conflicting interests is thus to be addressed at the District’s next meeting. Public input will be afforded, but please limit your input to a concise statement at the beginning of the process, reserving additional comments should you have them for the end of the meeting.

Current Status: Currently (2010-05-27) the lake is sitting at 9.5’. The latest lake level measurements are available on our Water Quality page of the website (www.DLWID.org). Currently one section of the dam is open again at this time as rains have brought the lake up and fish passage issues are at least being attempted to be mitigated for by pulsing and/or section removal. This period of pulsing and/or whole section release will end after May 31st. The utilization of the dam from June through October, is thus open for consideration.

Current Considerations: It had been voiced in March 2010 meeting that if the dam was not installed in April, many properties would not have access to the lake for additional months. A motion was made to install the dam allowing for the new lake contractor the flexibility to allow for fish passage by means of leaving one section out of the dam providing the lake level could be maintained between 9.5’ and 9.3’ through June 1, 2010. At the time of the meeting (March 4, 2010) the lake level was 9.0’ above MSL. It was stated by a member of the audience that at this lake level many properties would not have access to the lake. Data were subsequently gathered by two of the District’s board members to investigate the potential impact on users at this same lake level of 9.0’. This presentation was made at the April 4, 2010 meeting and is available online at our website on the Project page under Lake Level (Director Presentation 2010-04-01 UPDATED). Some of the conclusions of that presentation were that nearly all of the properties surveyed the depth of the water when the lake was at 9.0’ was sufficient for drafting a typical pleasure craft. Where draft was insufficient at the far end of the canal on Thompson Creek, the addition of 6” of water to 9.53’ would have marginal benefit. For a complete review please revisit the slideshow from our website. Additionally a comprehensive review of this issue of the 2009 review is also available online (Staff Presentation 2009-04-01 ). What is presented below is new or additional information in no particular order that may be pertinent to the board discussion and decision on this issue along with some summary issues from previous meetings.

Water Rights: Rock Creek & Siletz POD: Irrigation of the golf course in our watershed came before City Council Monday 2010-05-24 for consideration. This is a proposal between the Confederated Tribes of Siletz Indians (CTSI) and the City of Lincoln City for selling water from the City’s existing water right on Rock Creek, a tributary of Devils Lake for irrigation of the Chinook Winds Golf Resort. This water right is held by the city, and as a municipal right it a permanent right, originally obtained by the town of Oceanlake. In fact, an existing, but unused pipe runs under Devils Lake that once served this community. As many will remember in 2006, the Devils Lake Water Improvement District, partnered with the Salmon Drift Creek Watershed Council, USFWS, ODFW and the City to alter a dam at the current Point of Diversion (Approximately River Mile 3.2) for fish passage. The current proposal would be to add a second Point of Diversion (POD) on this certificated municipal water right. City Council voted unanimously to approve this agreement. END_OF_DOCUMENT_TOKEN_TO_BE_REPLACED

We recently requested and the lake level measurements from DLWID since the installation of the dam.  It appears that the lake has maintained a level between  9′ – 3″ and 9 – 5.3″ as designated by the District.  The arrows in the diagram below indicated the following; 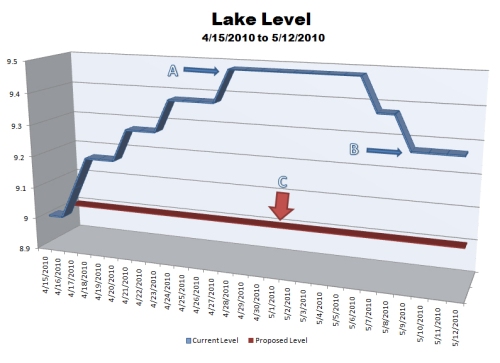