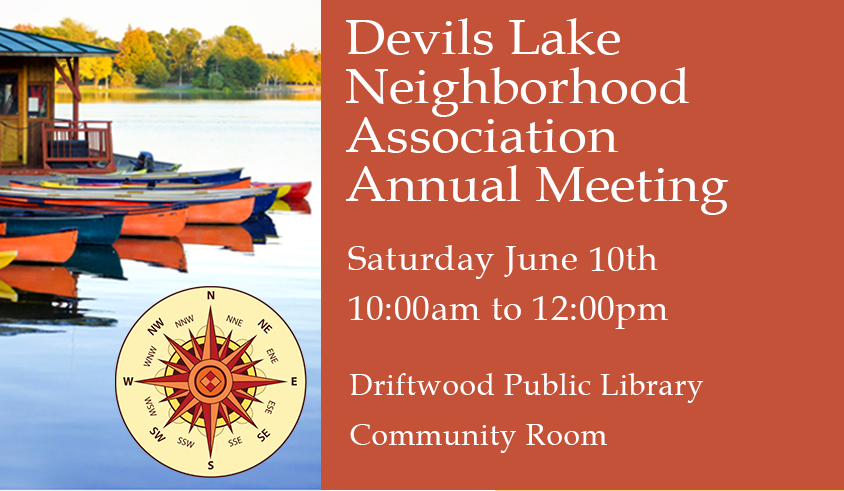 Approximately 20 members in were in attendance on June 10, 2017 at the Driftwood Public Library for the DLNA Annual meeting. Pat Christie covered the highlights of the DLNA financials. Steve Brown asked if we could break out Business from individuals so we could see where our fundraising efforts may need to be focused in the future. Fireworks funds are looking good as we are nearing the required funds to pay for the show. There is an available general fund balance of $4,383.51 which includes a donation by CLEAN as they closed that PAC. There was a discussion of the one open board position, please let us know if you're interested in serving. DLWID May Election results were discussed with introductions to Steve Brown and Kathy Kremer. Both David Skirvin and Brian Green were acknowledged as there was a thank you party held at Kent and Anne Norris house in their honor.

DLWID Lake Manager Josh Brainerd provided an update on DLWID projects and DLNA partnership. Josh spoke about the current aeration project and the committee's made up of many DLNA members. Members brought us several issues, The topic of gnats came up and how to combat them. They appear a few times a year. Not much to do other than to let them fly. ODFW fish stocking in D Lake was brought up; Steve Brown had the statistics of approximately 20,000 fish annually legal/large/trophy sizes typically are the possibilities. This year we received 13,500 legal and 7,500 large. More information is available at this link.