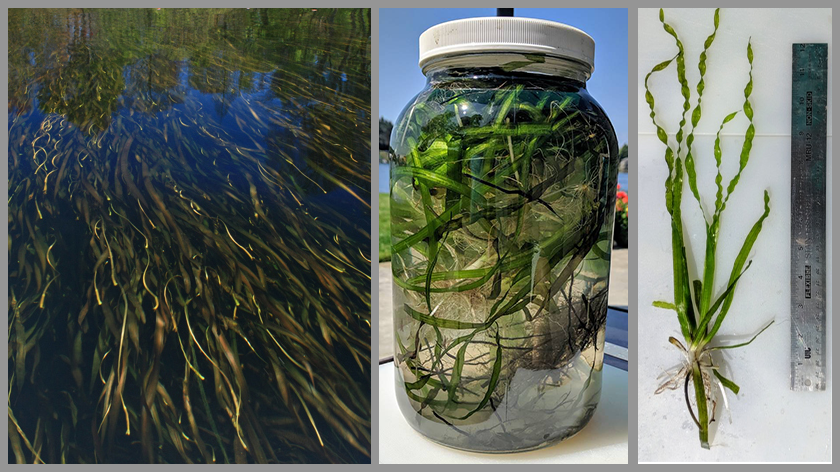 We’ve been hearing from many of our neighbors that they have plants or grass growing in the lake in front of their property where previously there were none.  According to Josh Brainerd, Manager of the Devils Lake Water Improvement District, “the District has received several reports of vegetation repopulating in Devils Lake.”

Vallisneria
The plant most commonly mentioned has been identified as Vallisneria americana, commonly referred to as tapegrass or eelgrass. It is a widely distributed non-invasive water grass not typically known for being problematic.

Tapegrass is a almost completely underwater perennial herb with long, narrow, green to sometimes reddish, ribbon-like leaves growing from rhizomes. Tapegrass can be distinguished from similar plants by a prominent stripe, called a midrib, running down the center of each leaf. The presence of coiled, corkscrew-like flower stalks can also help identify this plant. Although tapegrass was introduced to the Pacific Northwest for fish and wildlife habitat purposes, it appears to cause none of the problems associated with invasive introduced plants like Eurasian watermilfoil.

I have experience growing tapegrass in my planted fish tank.  It is a desirable plant for the hobbyist, as it is a fast growing plant that is easily propagated throughout the fish tank.  Great for a fish tank, and something to watch in our lake environment. At my lakefront home tapegrass is now growing in the lake bottom as it did before the introduction of grass carp. The rhizomes have survived in the lake bed all these years having been nibbled to the ground by carp; they are now sprouting and producing foot long foliage.

Did the aeration system cause this?
Many have asked if this is happening because of the newly installed lake wide aeration system? According to Clemson College of Agriculture,  “circulations systems will not control existing aquatic weed problems, except for some blue-green algae (cyanobacteria) which thrive in still water. Circulation systems can disrupt these harmful algae blooms from growing out of control. Also, circulation system may improve water chemistry and make dissolved nutrients less available to algae and weeds. By reducing the availability of nutrients, circulation systems potentially can slow but not prevent the growth of aquatic weeds.”

What about the grass carp?
Devils lake had the oldest population of grass carp in the country.  The last batch was released into the lake in 1993 some 26 years ago. Grass carp typically live between 10 and 12 years; beach living has obviously benefited our carp community.  Unfortunately, these past two winters sea lions have been spotted in the lake and they have made a meal out of our very old hibernating carp.  The DLWID estimates that the number of carp may have fallen well below 200. While not the only factor; the reduction in grass carp population may be the largest contributor to the return of the tapegrass.

Do I need to panic?
No.  It certainly is too soon to panic, the return of aquatic vegetation to Devils Lake has been anticipated and discussed for years.  Josh Brainerd, of DLWID recently posted that “over vegetation is certainly an issue, (but) Devils Lake is still currently well under a healthy level of in water vegetation.” He stated that “the District has evaluated aquatic vegetation management options and will be discussing these options in upcoming board meetings.”

Fortunately, Vallisneria is a common inhabitant of Oregon lakes and is not generally considered to be problematic.  In pre-grass carp Devils Lake the most problematic plant was Eurasian Watermilfoil, which has not made any recent appearances.

Can you help?
We think that any effort to improve Devils Lake is more successful with the participation of local residents.  The DLNA is working through some ideas where we all could help a little as we re-balance our lake to one that supports a proper mix of aquatic plants, fish, insects, and even algae.

Keep an eye on these newsletters.  We will let you know what you can do to help in coming issues.