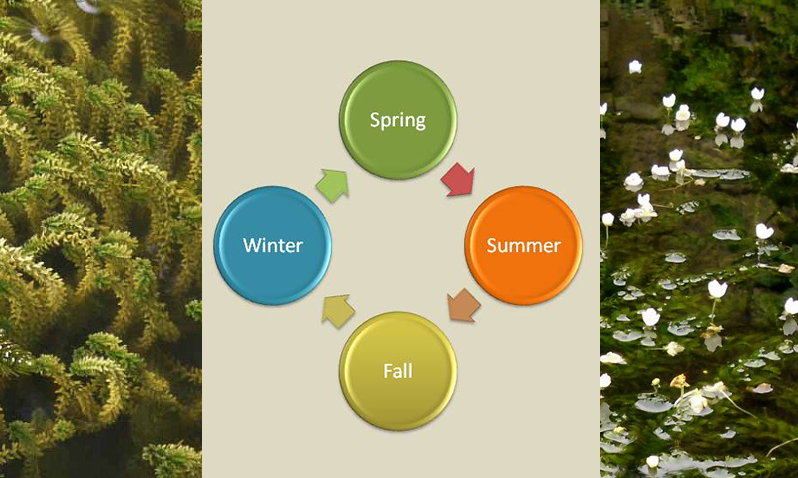 Elodea canadensis is a submerged aquatic plant of slower flowing rivers and lakes, native to North America. It has been intentionally introduced into areas outside of its native range as an ornamental aquarium species. This species has a wide ecological tolerance and grows relatively fast. It is a perennial, overwintering in the deeper water, and reproducing asexually. Disturbance increases the dispersal of numerous buds and the vigorous re-growth is enhanced through changes in availability of nutrients. Elodea canadensis can form dense mats which can interfere with recreational activities, navigation and port infrastructure. In addition to this, the dense mats outcompete native plant species and therefore decrease the biodiversity in an area. It also accentuates the accumulation of finer organic silts which enhances its growth further as nutrients are released. Elodea canadensis originates from North America, concentrated around the St Lawrence Valley and the Great Lakes regions and the Pacific West Coast, but now occurs throughout the US. Elodea canadensis is considered invasive in Australia, New Zealand, Cuba, Alaska. Oregon classifies Elodea canadensis as a native plant.

Elodea male plants are less common than female in its native range. Plants are usually dioecious (individuals bear either male or female flowers only) and produce seeds in ellipsoid or oval capsules. The plants reproduce readily by asexual fragmentation, and many invasive populations consist entirely of individuals of the same sex, having originated from a single, introduced, plant fragment. The main growing season is between mid-April and October. Plants can die back in Autumn but may survive in temperate climates. Turions or short, densely-leaved resistant stems, develop then break off to float around the water body before they sink to the bottom over winter, where they rest until they re-grow in spring.

Over-wintering buds and fragments of the brittle branches are easily detached by waves, currents, foraging animals and boat traffic. New roots develop quickly on the nodes of these fragments which are carried away to form new stands. This method of propagation gives Elodea canadensis a considerable advantage over annual species and resulted in its rapid spread throughout North America.

Survival is by densely-leaved crowded ends or turions. During autumn, turions cease to elongate and come to bear tightly clustered dark green leaves, which contain increased starch and are slightly more waxy than the normal foliage leaves. These turions may be liberated when the parent stems disintegrate and sink to the bottom, or remain attached throughout winter. The turions remain dormant until spring, when the leaves expand, roots develop from the lower nodes, the axis elongates and a new plant is formed. Elodea canadensis begins to grow during the spring season and is well formed by early May.

More detailed information is available at this link.