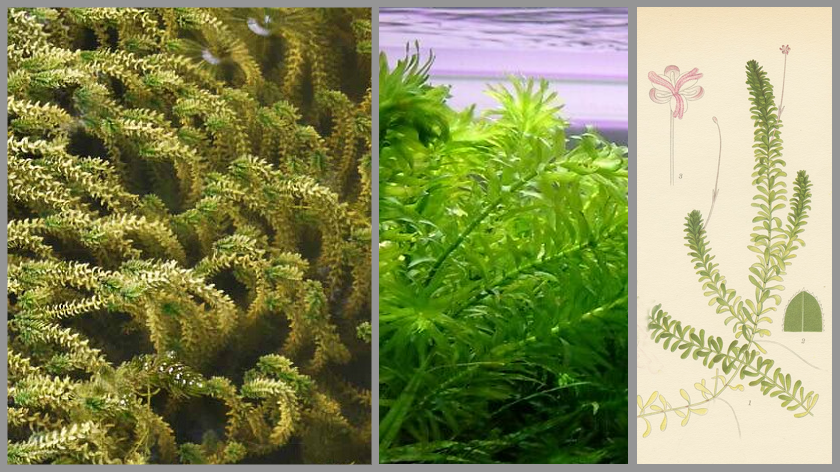 It’s been a couple of years since we published Aquatic Plants 101 where we introduced you to Vallisneria americana, an aquatic plant that is native to coastal lakes.  At that time, Vallisneria was just becoming noticeable around Devils Lake.   This time of year, if you glance into the lake you most likely would not see any Vallisneria as its growing season has just begun; this plant is more of an issue in the late summer.  This time of year, you would likely see a thick carpet of another plant species Elodea which is considered a noxious weed in Oregon coastal lakes.  Elodea is one of the few pond plants that can remain green all winter long.

According to Wikipedia, Elodea is a genus of 6 species of aquatic plants often called the water weeds. Elodea is native to the Americas and is also widely used as aquarium vegetation. An older name for this species is Anacharis.

Elodea, sometimes called American or Canadian water weed or pond weed, is widely known as the generic water weed. The American water weed lives entirely underwater with the exception of small white flowers which bloom at the surface and are attached to the plant by delicate stalks. It produces winter buds from the stem tips that overwinter on the lake bottom. It also often overwinters as an evergreen plant in mild climates. In the Autumn, leafy stalks will detach from the parent plant, float away, root, and start new plants. This is the American water weed's most important method of spreading, while seed production plays a relatively minor role.

This species has a wide ecological tolerance and grows relatively fast. Elodea can form dense mats which can interfere with recreational activities and navigation . In addition to this, the dense mats outcompete native plant species and therefore decrease the biodiversity in an area. It also accentuates the accumulation of finer organic silts which enhances its growth further as nutrients are released.

In Devils Lake, silty sediments and water rich in nutrients favor the growth of American water weed. These plants will grow in a wide range of conditions, from very shallow to deep water, and in many sediment types. It can even continue to grow uprooted, as floating fragments.

Elodea is one of the most common aquatic plants in North America. In moderation the presence of Elodea in Devils Lake can also yield some benefits. It provides good habitat for many aquatic invertebrates and cover for young fish and amphibians. Waterfowl, especially ducks, as well as beaver, and otters eat this plant.

Did the aeration system cause this?

Is Elodea growing more because of our lake wide aeration system? According to Clemson College of Agriculture,  “circulations systems will not control existing aquatic weed problems, except for some blue-green algae (cyanobacteria) which thrive in still water. Circulation systems can disrupt these harmful algae blooms from growing out of control. Also, the circulation system may improve water chemistry and make dissolved nutrients less available to algae and weeds. By reducing the availability of nutrients, circulation systems potentially can slow but not prevent the growth of aquatic weeds.”

What about the grass carp?

Devils lake had the oldest population of grass carp in the country.  The last batch was released into the lake in 1993 some 29 years ago. Grass carp typically live between 10 and 12 years, yet recent observations indicate that there are still a small number surviving. While not the only factor; the reduction in grass carp population may be the largest contributor to the return of aquatic vegetation in our lake.

Perhaps the most asked question around the lake is “can we put more grass carp in?”  This is indeed a complex question but the short answer has been “No”.  The Devils Lake Water Improvement District has been actively trying to win approval for a permit to begin restocking the lake with sterile grass carp.  This has been a multi-year effort and the consistent answers from State agencies has been “Oregon rules do not permit it.”  Even still the DLWID continues to meet with the State to discuss the possibility of a specific exception for Devils Lake.  There may be an opportunity for our community to join in this advocacy effort, we will keep you posted.